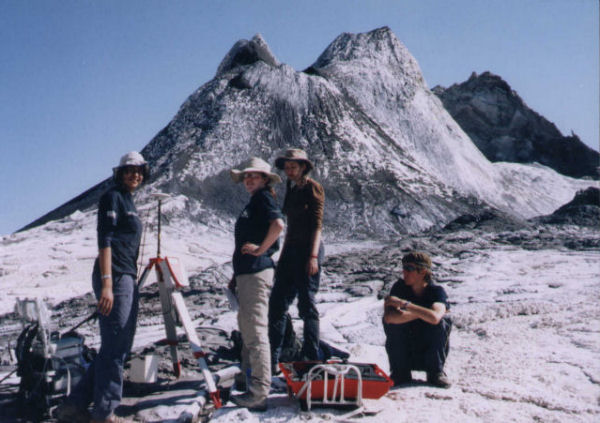 After a 6 hour, torch-light accent we were lost for words by the sight that met us, a white lunar landscape highlighted by the black streaks of new solidified lava. As we crossed the crater floor, which cracked like ice and crushed like snow, the drumming and swishing sounds of magma filled our ears like the continuous drums of Mordour.

Theses were our first steps on the summit of Ol doinyo Lengai the world’s only active carbonatite-lava volcano found in the North Eastern region of Tanzania, and part of the East African Rift valley. (This is an area of the world where plate tectonics are at work, pulling East Africa apart, an action that results in large-scale rifting, faulting and extensive volcanic activity. In a few million years the Rift Valley will consequently be replaced by a narrow ocean, an event which seems incomprehensible when the temperatures reaches 38°C and water is a scares and precious resource.)

It had all started a year ago, when I applied, and was successfully accepted to participate in BSES Expeditions first Expedition to Tanzania. BSES Expeditions (formally the British Schools Exploring Society) is a non-profit making Educational charity formed in 1932 by a veteran of Scot’s Antarctic Expedition. The society arranges annual expeditions to provide young people with the opportunity to undertake exploratory projects and scientific fieldwork in remote and challenging areas of the world. To participate in one of theses expeditions I first had to raise £3512 (plus equipment), a challenging and daunting figure which I reached (almost) through fundraising events and writing hundreds of letters to grant giving charities and local businesses. Thank you for all the support I received.

In July 18th 2004, I met 35 other young people from across the UK, dressed in the same blue T-shirt, complete strangers who would soon become the best of friends. After an 8 hour flight we took our fist steps on African soil, erupting with excitement as we boarded the buses for a further 3 hours journey. We crossed the Kenyan border in darkness and had our first glimpse of Tanzania the country, which would become home for the next 5 weeks.

The aim of the expedition was to undertake scientific fieldwork, producing data that would be used by various universities and organisations on our return to the UK. As part of the survey group (groups were known as fires) we worked alongside the geo-science fire. Collectively we focused on compiling a large-scale gravity profile across the eastern flank of the Rift Valley using a Lactose-Romberg Gravimeter to take reading on top of Ol Doinyo Lengai as well as on the valley floor. In order for these gravity readings to be of any use the position, especially the height of the gravimeter is required at a high level of accuracy. To achieve this we used surveying standard GPS equipment (the little orange boxes on tripods that you often see being used on building sites). Another aim of the expedition which I was involved in was the use of Leica total stations to map the crater of Ol Doinyo Lengai and measure the position and height of the gravimeter. It was only through experiment with the more traditional map-making methods of plane tabling (using plane tables from the late 1800’s) that we could appreciate the benefits of modern technology. Instead of taking an hour to plot 5 points with the plane table, we were able to plot hundreds of points with the total station in the same space of time. This made the production of an accurate and complete map much quicker and easier (you don’t have to be a mathematician to work a total station!)

All this high-tech equipment may sound very impressive, but it is something which you quickly forget about when carrying it up horrendously steep and sandy slopes at 4am in order to undertake this science work on the summit of a volcano 2583m high. However, before we could we could begin any of the projects we spent several days walking in hot and sticky conditions to the foot of the volcano. These treks were often tiring but wholly worthwhile as we experienced African culture and wildlife first hand, stopping to watch giraffes and talk to the many friendly locals who where forever saying “polei-polei” (slowly-slowly) to us, as nothing is done in a hurry in Africa. These long walks (up to 34 km in the midday heat) also taught us that if one of our local guides said it was only 5 km before we reached camp he could mean anything from 5-20 km!

Because of the obvious logistical difficulties of camping on top of an active volcano without fresh water it was difficult for more than six of us to scale the volcano at a time. Two other girls and I formed the second group to reach the volcano summit, a long and challenging hike that was thoroughly worthwhile when we were able to see Mount Kilimanjaro in the early mourning light. After this exhilarating experience I swore that I never wanted to climb that mountain again. Fortunately for us, we were asked to spend the next night walking up Ol Doinyo Lengai again in order to use the following day to take gravity reading at 200m intervals down the side of the volcano, something which I found myself eagerly saying yes too.

The strenuous walk to the summit was again made worthwhile as we reached the crater rim before sunrise in time to see red-hot lava erupting from the Mountain of God (as the local Maasai tribes people call Ol Doinyo Lengai), and gushing down its sides like a 500°C waterfall. Strange as it may seem this temperature is relatively cool for molten lava and so we were able to stand a few meters away from its streams without placing ourselves in extreme peril. This is a memory I while never forget.

Before we knew it the 5 weeks drew to an end leaving us with nothing more than unforgettable memories as we said our tearful goodbyes to each other, or amazing leaders and the fantastic local guides and cooks who felt like old family friends. One of the experiences I will never forget will be playing football and net-ball (without nets!) with local school children in the shadow of the Mountain of God.

For more information about BSES Expedition, or to become involved in future expeditions visit the BES web site or write to: BES Expeditions, at The Royal Geographical Society, 1 Kensington Gore, London, SW7 2AR.