Puff flapped his great wings and rose high into the clear blue sky. As he rose up above the desert sands of the Sahara he entered cooler air as the air near the ground was begging to get quite hot. He flew on across the whispering sand dunes and wondered why they whispered. Perhaps it was the continuously moving sand blown by the continuous winds. That must be it thought Puff, but his attention was drawn to a strange mist that he was flying towards. It wasn’t a sand storm. It did not have the grey mustard look of a sand storm and if it was a sand storm he definitely wanted to avoid it. This mist looked like wispy clouds. Puff was curious and just had to investigate, so he flew on into the mist. The mist swirled round him but he kept flying in a straight line. Soon the mist started to thin and suddenly he was out of it. Below him was a land he had never seen before. Before him was a range of high snow capped mountains and at their feet were towns and villages. One town immediately caught his eye as it was overlooked by a large castle with turrets with pointed roofs and flags flying and red and white shutters on the windows, which reminded him very much of Neuschwanstein which he had visited once before, but this was not Neuschwanstein and was perhaps even more magnificent. In the next valley was another town with a large castle, but there were no flags flying. In fact, it was covered in thick thorn scrub and brambles and looked very uninviting. 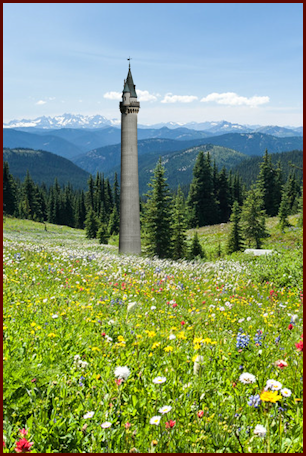 Puff was always curious about things and wondered what was on the other side of the mountains so decided to fly over them and investigate. He found a beautiful green valley full of colourful wild flowers. There was a little stream meandering through the valley, bubbling over waterfalls and flowing under a little bridge. Next to the bridge was a tall tower, a very tall tower, but it was like no tower he had seen before. It looked like a lighthouse, but this was not the place to find a lighthouse. It had no door at the base and no windows except at the top under a tall conical roof, with a little balcony under the windows. Curious Puff just had to investigate so flew to the top of the tower and looked through a window. Inside he saw a beautiful Princess with long, very long, golden hair, but when he looked through the window he blocked the light making the Princess look up and then she started screaming and screaming.  That’s very odd though Puff, she must have seen me, but how? People cannot see me, unless of course I want them to. Puff immediately moved behind the tower and waited for the screaming to stop, which it did after awhile, but it seemed rather a long while to Puff. In his best polite quite voice Puff said “I am sorry if I startled you. I am Puff the friendly Dragon. I would just like to talk to you.” The Princess told him her name was Leznupar and she was being held prisoner in the tall tower by a wicked witch. Just then Puff noticed a figure in the distance moving towards the tall tower so he quickly flew off and hid in a grove of trees from where he could watch the tall tower. As the figure came closer he could see it was an old woman in a big black cape and a tall pointed black hat and she had a big hooked nose with a wart on the end. This must be the wicked witch thought Puff and as he watched she stopped at the bottom of the tall tower and started to sing in a croaky voice “Leznupar Leznupar let down your hair” several times and out of the window came a ‘rope’ of long golden hair, so long it reached right down to the ground. The witch tied a basket to the hair then a strange thing happened, the witch looked younger and younger and prettier and prettier as she stroked the golden hair. She turned into a beautiful Princess. Puff was so fascinated that by the time he looked up the basket was being lowered to the ground on the ‘rope’ of hair. The ‘Princess’ in the black cape and a tall pointed black hat untied and  picked up the basket and skipped off across the little bridge and through the flower filled meadow away from the tall tower.

When she was out of sight Puff went back to the top of the tall tower to talk to Leznupar. “Why don’t you make a rope out of your hair, climb down it and escape?” said Puff. “Well” said Leznupar “it is not that simple. I would have to cut my hair off and the wicked witch said if I did that I would die, and anyway I don’t where I am or how to cross the mountains”. “Oh I could take you across the mountains to wherever you wanted to go” said Puff “but I think all that hair would be a bit of a problem. There must be some solution?” Leznupar gave Puff a funny look and said that there was a solution, but it involved her being rescued by Prince George and he was the only one who can cut her hair off. “Oh I know Saint George” said Puff with a big smile “he lives in Ethiopia and is going to come to Wales to slay me, but we are going to talk it over and will became good friends, but I don’t know how to get to Ethiopia from here. In fact, I don’t even know where I am. You see I flew through this strange mist…” Now ‘dragon time’ is all muddled and very confusing and the future can be the past and the past can be the future and the past or the future could be the now. Puff remembered his safari to Australia where he met the Aborigines at Uluru who told him about the ‘dream time’ and how their stories depended on where you came from and were going to so were just as relevant if you went from here to there or if you came from there to here, but that is another story for another time…

“Don’t you know anything” snapped Leznupar “Prince George and Saint George are not the same person. Prince George lives on the other side of the mountains in the big castle with green and silver shutters on the windows on the hill overlooking the town.” I saw a castle with red and white shutters” said Puff “but not one with green and silver shutters. The only other castle I saw was covered in thick thorn scrub and brambles”. “Oh, so the wicked which was right. My brother, Prince Rupert, and I live in the castle with the red and white shutters, or at least I did until I was imprisoned in this tall tower, and Price George and Princess Gorgeous live in the castle with green and silvers shutters, or at least she did until she was imprisoned in this tall tower”.  Poor old Puff was now getting very muddled. “There is another Princess in this tall tower?” he asked. “Yes” replied Princess Leznupar “she is asleep on the other side, her name is Princess Gorgeous”. Puff has heard the story of Sleeping Beauty and perhaps this was the same Princess. “She can only be woken up with a kiss from Prince Rupert, or so the wicked witch says. You see, I am to marry Prince George and Princess Gorgeous is to marry Prince Rupert, but when Gorgeous was a baby the wicked wish made a bad spell and when Gorgeous was 16 she pricked her finger on a spinning wheel and fell asleep and we both ended up imprisoned in this tall tower.”

Puff thought long and hard. There must be a solution. He could understand why Prince George had not tried to rescue Princess Leznupar as he was asleep, but he wondered why Prince Rupert had not tried to recue Princess Gorgeous. When he asked Leznupar about this she told him that the people who lived on the other side of the mountains were frightened to cross them because the wicked witch had told them there was a valley where Dragons lived. Puff got really excited by this news and couldn’t wait to meet these Dragons, but Leznupar told him it was all a wicked lie, which then made Puff quite sad. So thought Puff, the people who live on the other side of the mountains do not know that this beautiful valley even exists and Prince Rupert had no idea where Princess Gorgeous was. Suddenly Puff shouted very loudly “I know what to do”. He shouted so loudly that a small amount of fire and smoke burst from his nostrils, which frightened Princess Leznupar a bit, but thankfully not too much. The solution was obvious, he would go and get Prince Rupert to come and kiss Princess Gorgeous and wake her up, then if the fables were true, Prince George would wake up and he could then bring him to rescue Princess Leznupar, but there was a small problem. Puff was a Dragon and although he was a friendly Dragon Princess Leznupar could see him and he frightened her when he first arrived. Perhaps the people who live on the other side of the mountains could also see him. Maybe it was something to do with the strange mist he had flown through and he was now in a different type of world.