As part of the investigation into the accuracy of using a Samsung Gear 360 for measurement, eight shots round at 45° intervals were taken with the Samsung Gear 360 rotated around its central vertical axis (tripod bush) and as each image could be split into the left and right hemispheres this provided four sets of four shots round at 90° providing 50% overlap for Control Point generation in PTGui, two from the front lens and two from the rear lens.
The split images were saved as *.PNG files so that there was no EXIF data and PTGui treated them as circular fisheye images with 180° angle of view returning good when running the Optimizer.

Stitching these in PTGui provide a more accurate result than using ActionDirector to join each pair. 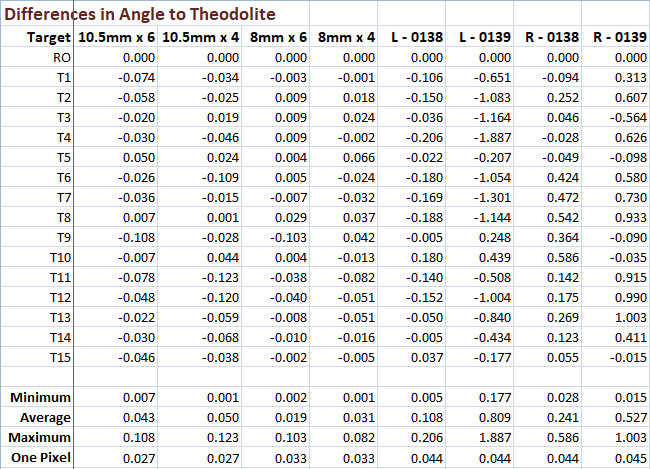 The diagram above shows the difference in angles graphically with the green circles showing 1, 2 and 3 degrees of arc.
The left image shows the results using a 10.5mm and 8mm fisheye lens on an FX DSLR, the centre image stitching the Samsung Gear 360 images in PTGui with four shots round at 90° intervals and the right image the results from joining the image pair with ActionDirector.

It is possible that rotating the Samsung Gear 360 about the NPP of the lens may produce a better solution and I investigated this with a second set of observations.
Although using this method means losing the advantage of a single shot multi-lens camera it suggests that if 360° panoramas are to be used for measurement then it is best to go with rotating the camera about the NPP of the lens rather than use a multi-lens camera with a single shot, unless such a camera is calibrated for measurement.