Both the Survey and Geosciences Fires were involved in measuring points in the crater of Ol Doinyo Lengai to create a Digital Terrain Model (DTM).

The points used to create a DTM of the crater were measure in 3D using a Leica TPS1200 Total Station.  This Instrument measures angles and distance to the points of interest and the three dimension co-ordinates of the points are calculated from these measurements.

The particular Instrument used was a Leica TCRP1205, which has an angular precision of five seconds of arc (5”) and is fitted with two EDMs (Electromagnetic Distance Meter).  One is a conventional Infra Red EDM which requires a corner cube reflector to return the signal for distance measuring and can measure many Kilometres to a single prism, but the one used for the survey is a visible Red Laser, which is reflectorless.  The PinPoint technology of this reflectorless EDM enables measurements to be taken easily and quickly, without a prism, with distances exceeding 300 metres in the crater area.  This meant that the Instrument could be positioned in safe working areas convenient for measurement. 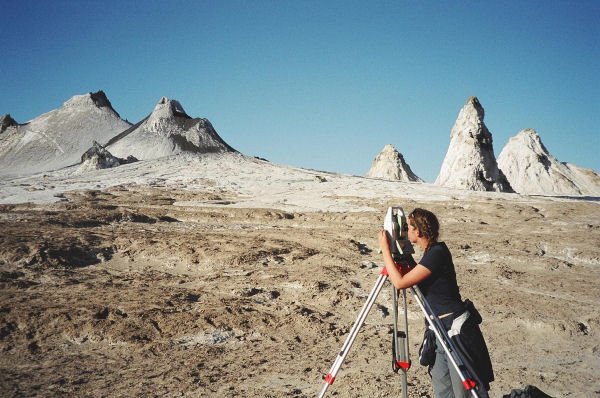 The members of the Survey and Geosciences Fires measure over 3000 points to provide the raw data for modelling the crater, from three Instrument Stations.

The survey data was processed in LSS to create the 3D model of the crater floor and hornitos with the ability to dynamically view the data.  LSS is a survey mapping software provided by the McCarthy Taylor Partnership in Birdlip, Gloucestershire. 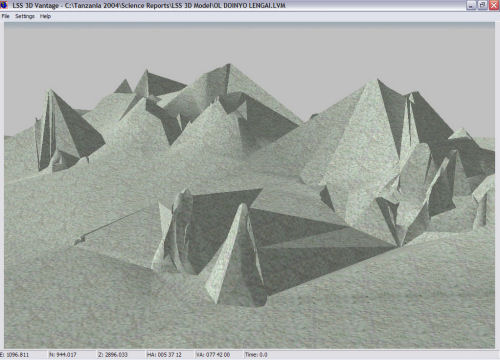