Trying something new with photography usually requires a significant financial investment, but if you have a suitable panoramic head (e.g. NN3, NN6, M Series, etc.), camera and lens you can create 3D 360° Panoramas with your existing equipment and once ‘the spirit moves you’ and you have ‘been bitten by the bug’ go ahead and purchase more kit.

I first became interested in creating 3D Anaglyph Panoramas a decade ago using the method detailed by Wim Koornneef.

I have been inspired to revisit the topic after reading a post by Javi Baranano., in which he describes the method using a single camera ahead of the NPP as ‘Rotational capture’ and “…pure illusionism, because we are going to deceive our cerebral cortex by showing two images with a different parallax”, so was keen to experiment with a stereo camera method.

The implication of stereoscopic is to use two cameras, which I hope to aspire to, but I did not have a budget at this time and two cameras are not always necessary. For example; for mapping with aerial photogrammetry a single (very large) camera is used and the stereo separation provided by the forward movement of the aircraft.

I noticed that Javi had experimented with a Samsung Gear 360 and thought this would be a good starting point as I acquired one some time ago to investigate the angular accuracy of the Equirectangulars it produced with ActionDirector as a colleague in London was attempting to use one for measurement and we were not getting the accuracy we expected and required.

As the Samsung Gear 360 has two cameras back to back I thought that if I offset the camera laterally by 32.5 mm I would get stereo pairs by going all the way round. 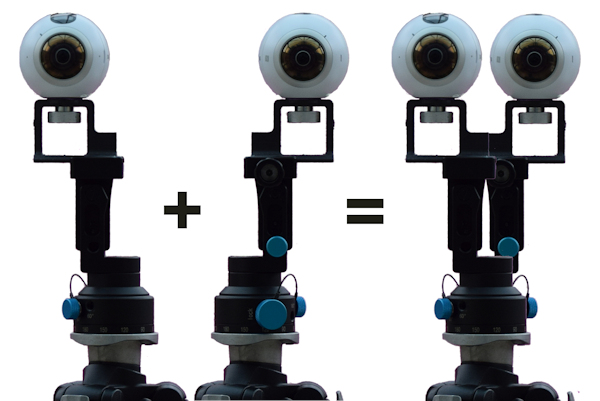 The first attempt was on a Nodal Ninja R1 and the result was encouraging although it meant having to use the timer and hiding for each image to avoid being in the panorama, but there were sever glitches in the Equirectangular which I put down to the NPPs not being in the vertical plane through the vertical axis of rotation and the limit of 6 shots round, which is the limit for my R1.

Next, I mounted the Gear 360 on a Nodal Ninja NN3 which enabled many more shots round and improved the results, but there were still glitches which I put down to the forward offset of the NPPs.

I also have access to an Insta360 ONE X so repeated the tests with this.
The results were considerably better than with the Gear 360, which I put down to the fact that the lenses are much closer together so the forward offset of the NPPs was much smaller, which suggested that getting the NPPs onto the vertical plane through the vertical axis of rotation would improve the result even more.

I now use an FX body with a 10.5 mm fisheye for making 360° Panoramas so mounted this on the NN3 and used it to take one set of shots round then rotate the horizontal support through 180° and take a second set.

This produced a very acceptable solution with minimum use of the Mask tool in PTGui to remove all the glitches with just 8 shots round (16 in all).
Using this arrangement meant I could just shoot without having to use the timer and hide for each shot and that I could actually have 65 mm between the principal rays for the left and right image, which would not be possible with a set up with two such cameras.
Clearly this arrangement would only be good for static subjects as although the Mask tool in PTGui is great for dealing with movement between subsequent images it would not be so good for coping with people and animals moving between the two rounds and especially with a cloudy sky.

I hope that it will inspire others to experiment with creating 3D 360° Panoramas with the stereo camera method, which I found much easier to post process than using the ‘Rotational capture’ method.